Boris is a professional sailor living in Germany’s most beautiful city – Hamburg. Boris has done three laps around the world, one of them non-stop and will soon be attempting this challenge single handed for the 2020 Vendée Globe, making him the first German to compete in the race.

Over the past years Boris has been involved in a couple of world records, including the Golden Globe around America, Transpac, Cowes-Dinard, Cape-Rio, San Francisco-Shanghai, Newport-Bermuda, Columbus Route and Giraglia. Boris loves sailing and his passion for the ocean has meant that with Pierre and the help of their team, he has developed the Ocean Challenge. With this he hopes he can share with you some of the fascination and excitement, the beauty and the freedom of ocean sailing which he has had the privilege to experience at sea during his professional racing.

Boris lives and breathes the ocean and when he is not on the water he can usually be found in our office working on the next campaign, looking at weather maps, press articles, bills and all the rest in order to arrange the next adventure. 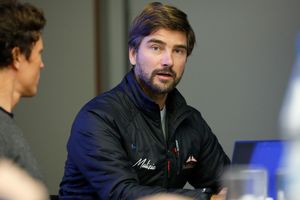