Biologist, Director and Founder of the MuMa Milazzo Sea Museum. He recovered and rebuilt
the skeleton of the Sperm Whale Siso.
Member of the Scientific Technical Committee of the Museum of Fauna of the University of
Messina. He collaborates with several universities, research organizations and associations.
For years he has engaged in the protection of the sea and in the recovery of cetaceans and
turtles in difficulty or stranded. In 2017 he carried out, on his own, the recovery of the
2
skeleton of a 10-ton Sperm Whale, then renamed SISO, which died due to an illegal drift net
off the Aeolian Islands and was on the news due to the large amount of plastic found in its
stomach. After having reconstructed the skeleton, he founded MuMa-Museo del Mare in
Milazzo, located in the ancient Castle of Milazzo, inside a church from 1529 which was later
transformed into a military bastion. In 2019, a conference with the Minister of the
Environment, Sergio Costa, was held in the Museum.
Federal sailing instructor (Fiv), scuba diver (1 star Fipsas-Cmas), Freediver (1 star FipsasCmas), and Sommelier (AIS). 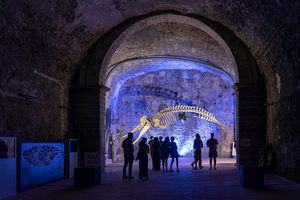